Ronnie Coleman is one of the most important and famous bodybuilders throughout history because of the tournaments he achieved, both at the local level within the United States of America or the global level in the tournaments of Mr. Olympia, and Ronnie Colman is still the leader in the game in terms of fame to the present day despite Who retired from sports several years ago, but no one can deny that he played an important role in the spread of bodybuilding in the world.

His full name is Ronnie Dean Coleman. He was born on May 13, 1964 in Louisiana, and specifically in Monroe, USA. He is a graduate of Grambling State University in 1984 with a BA in Accounting with Honors.

And Coleman previously played American football in the midfield with the GSU Tiger team under the direction of coach Eddie Robinson, and after graduating from college he failed to find work as an accountant but he did not give up and instead worked at a Domino’s pizza branch, and he ate pizza free daily because he is so poor that he can barely afford to eat outside of work, and over time he became a police officer in Texas, from 1989 to 2000 and then a reserve officer until 2003.

After completing and leaving the service as an officer, one of his friends (Gustavo Arlota) suggested that he go to the “Metroflex” sports club, which is owned by bodybuilder Brian Dobson, and Dobson offered Coleman free membership for life and he trained him in a competition (Mr. Texas bodybuilding competition) That year, hence the beginning where Coleman won first place in both heavyweight and comprehensive classes, Coleman also won his first professional competition and the Canada Pro Cup was in 1995, and the following year he also won the competition again, then followed by winning the position The first in (Russian Grand Prix) in 1997.

From our perspective on the lives of athletes, we see a group of people whose lives revolve around a specific sport and think about what they eat at all times and try to balance the hours of rest and exercise correctly and accurately, and we rarely remember that at a certain age, often the age of 33, their abilities weaken and their performance decreases And their likelihood of becoming infected is greater and more.

Unfortunately, there is more unpleasant news, most notably what bodybuilder Ronnie Coleman showed us in his documentary in which he talks about the impact of this sport that he practiced for 10 years on his health and how “King” – as he is called – 8 Olympic victories, so we stare In scenes that focus on Coleman’s huge and ideal muscles and show us the climaxes of his success in international tournaments and the descriptions of his friends and colleagues for him, “The unnatural man whose appearance cannot be absorbed or matched“, he was strong and bulky and nobody would come like him, if Coleman was indeed so, then why is Coleman Currently walking on crutches?

Coleman won the title “Mr. Olympia” 8 times in a row and when he stopped competing after a few years he began to suffer from chronic injuries to his lower back and hips that were later replaced, and in one of the press interviews Coleman admitted his fear of not being able to walk again! , yet he ended up running 10 Operations, each costing between 300,000 to 500,000 USD.

A medical specialist in the documentary explains that Coleman’s insistence on carrying very heavy weights increased the pressure on his body and did not accept the capabilities of his body that accommodate a certain level of weights, weights and exercises, so he ended up being held in hospitals between doctors and medicines.

Ronnie Coleman Awards in the world of bodybuilding

In this article we have reviewed the most prominent life of legend Ronnie Coleman in the field of bodybuilding that will not be repeated. And the pain he suffered despite his insistence to continue practicing his favorite sport.

you can also read: How to harden your muscles in 7 days! 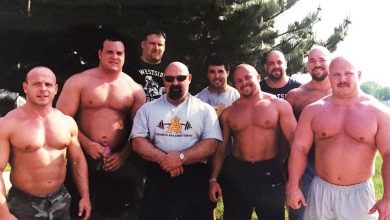